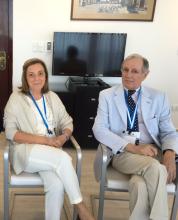 On March 8th -10th 2017  the Association of Caribbean States celebrated the XXII Ordinary Meeting at the Hotel Habana Libre in Havana, Cuba.

Argentina`s Delegation comprised Ambassador Ana Pisano as Head of Delegation and Minister Alejandro Amura as Director of the Anglo Caribbean in the Ministry of Foreign Affairs and Worship in Buenos Aires. Argentina is an Observer Country in the ACS.