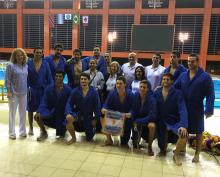 In February 2017, the Argentine Water Polo team participated in the UANA Water Polo Cup 2017 at the National Aquatic Centre in Couva, Trinidad.

The team comprised 13 players, their coach, and technical aides.

The tournament determined the teams that would participate in the World Water Polo Cup, which will take place in July this year in Budapest.

Brazil, Canada and Trinidad and Tobago also competed in the tournament.