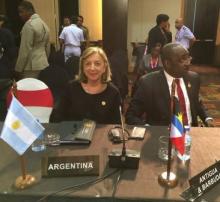 The Twelfth Conference of Defense Ministers of the Americas (XII CDMA)  which was established in July 1995, is a multilateral political forum of Ministers responsible for defense matters of the independent countries of the western hemisphere.

The CDMA consists of thirty-four Member States and was created for the purpose of debating, analyzing and exchanging experiences among Ministers, and aimed at increasing cooperation in the areas of defense and security.

Ambassador Ana Pisano was acredited as Head of the Argentine Delegation at the Conference which was held in Port Spain from the 10-12 October 2016.