Ambassador Pisano attends Prize Giving Ceremony at the University of the West Indies. 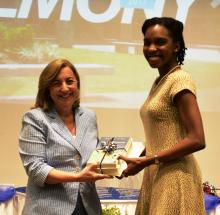 On Wednesday, October 25, 2017, H.E. Ambassador Ana Pisano was a guest of honour at the annual Prize Giving Ceremony of the Faculty of Humanities and Education, University of the West Indies, St. Augustine Campus.

Amb. Pisano presented prizes – copies of the book Martin Fierro personally signed by Her Excellency – to the three students who earned the best average for the academic year in the Spanish Language Programme: